Those who have recently spent time in Tampere must have noticed that we have a new acquaintance in the traffic – Tampere Tram. The first phase of building the tramway has now been completed and the route runs from Pyynikintori to Hervantajärvi and from Tampere University Hospital to Sorin Square. The tram is currently being used for driver training and test runs. The trial traffic began on May 10th giving the most enthusiastic passengers possibility to try the tramway for the first time. Regular tram traffic is scheduled to begin at the end of summer on August 9th, 2021.

Creanex developed a simulator for Tampereen Raitiotie Oy in cooperation with Škoda Transtech Oy and 3D-talo. The simulator is used to train future tram drivers and traffic controllers. As a Tampere-based company, participating in the project felt particularly significant. The concepting phase started in August 2019 and the simulator was officially put into use in June 2020. Creanex was responsible for the simulation, exercises, and hardware. 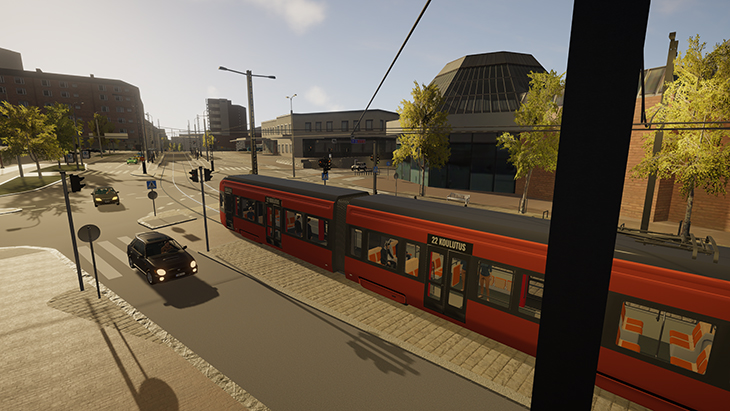 Tram traveling through the city

The driver training lasts about half a year and it includes theory lessons as well as driving lessons with simulator and the tram itself. The simulator provides a way for drivers and traffic controllers to practice and hone their skills in a safe environment. The simulator was placed inside a tram model at the Tampere Hervanta depot so that the driving lessons could be started in the most realistic environment possible, and the drivers could get acquainted with the controls and their use in the actual tram cabin. Currently tram lines 3 and 4 have been modeled for the simulator (from Pyynikki to Hervanta and from Sori Square to Tampere University Hospital campus). It has been of great importance to the driver candidates, that the tram lines can be practiced in the simulator before they are operational. In the future the tramway model will be developed to meet upcoming expansions. 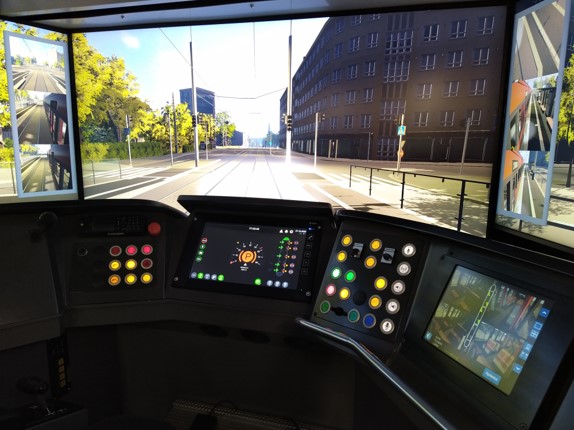 The hardware itself consists of three 55” screens that display the drivers view from the cabin. The screens also display the tram mirrors so that the driver can follow the movement of the passengers and control the tram doors. The cabin features right-hand drive controls and drivers display that are configured to perform the same functions in the simulation as they do in real life.

You can find out more about which cookies we are using or switch them off in settings.

This website uses cookies so that we can provide you with the best user experience possible. Cookie information is stored in your browser and performs functions such as recognising you when you return to our website and helping our team to understand which sections of the website you find most interesting and useful.

Strictly Necessary Cookie should be enabled at all times so that we can save your preferences for cookie settings.

If you disable this cookie, we will not be able to save your preferences. This means that every time you visit this website you will need to enable or disable cookies again.

This website uses Google Analytics to collect anonymous information such as the number of visitors to the site, and the most popular pages.

Please enable Strictly Necessary Cookies first so that we can save your preferences!